Defunding Planned Parenthood? Might as Well Say Taking Away Our Rights 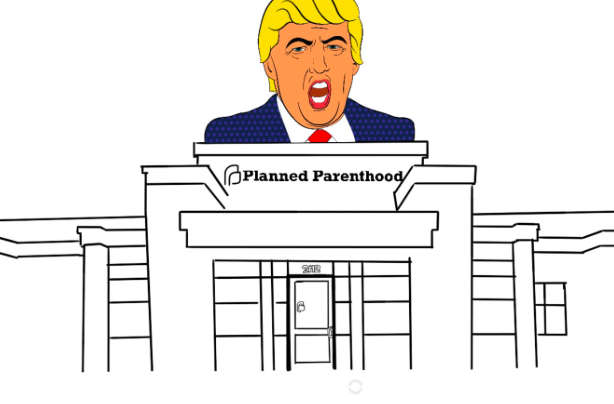 Orange leaves line the sidewalks throughout the city of Bend and Trump and Biden’s dueling campaign signs stand proudly in people’s front yards. The year is 2020—the year of a worldwide pandemic, the year of the Black Lives Matter campaign, and hopefully the year we get a new president.

Trump has recently announced that, if reelected, he plans to defund Planned Parenthood, meaning that women’s basic human rights would be stripped. Women will not have access to free birth control, abortions, STD screening and most anything regarding sexual health.

Planned Parenthood is most infamous for providing abortions. Interestingly enough, the majority of women getting abortions are low income individuals. This is greatly because of demographics and the rising numbers of families in poverty. Women of higher incomes also have more access to contraceptives and are better able to protect themselves from political puppeteering.

On the other hand, younger women in poverty have higher pregnancy rates because poor american girls are faced with the cultural notion that it’s worthless to invest in their own economic futures.

“This is why the fight for reproductive justice is more than the right to an abortion: it’s about ensuring that families are able have the rights, resources, and safety nets to ensure families can truly thrive,” said Vox writer Renee Bracy Sherman.

Even if the Trump administration defunds Planned Parenthood, abortions will realistically still occur. The biggest challenge for women will be finding a way to safely get abortions and avoid jail time. Already, women in conservative southern states are prosecuted for recieving abortions.

Storm student Chelsea Kropp has advocated for Planned Parenthood using Tiktok as her platform and gained quite a following.

“In the past, before Roe vs. Wade, there were a lot of abortions but they were all back- ally and illegal. Women were using coat hangers which caused many bad issues for women. Defunding Planned Parenthood won’t stop abortions, it will just make it a lot less safe for women,” Kropp said.

In 1973, Supreme Court case Roe vs. Wade gave women access to safe abortions across the country. However, this decision greatly divided the country and gave pro-lifers something else to argue about.

“Whenever you make something illegal, there’s always going to be consequences. When they made alcohol illegal in the ‘20s, people were still selling alcohol under the table,” said senior Miles Van der Zwiep. “It’s all going to happen. So the idea of defunding Planned Parenthood and getting an abortion is more meant to drastically limit the people who are having abortions and to save the lives of the unborn children”.

While Van der Zwiep’s opinion is valid, upper-class individuals will still have a better chance of receiving safe abortions whereas lower-class women will likely be forced to protect a child without resources or economic stability. In the world, the republicans seek, poor women die.

At what point does it become a fight for basic female rights instead of accepting the opinions of white males who aren’t even given the draining and challenging task of bearing a child.

Unfortunately, our President does not fall short of this description.

“He [Donald Trump] once sent New York Times columnist Gail Collins a copy of something she had written about him with her picture circled and ‘The face of a dog!’ written over it,” said Washington Post columnist, Karen Tumulty.

This could be the man with the power to decide what females can and cannot do with their bodies.

Additionally, Planned Parenthood offers an anonymity to women and men, especially teenagers who feel uncomfortable telling their parents about their sex life. Less teens will receive access to these resources meaning that STD rates will rise, women and men will have less access to contraceptives and women’s birth control options will be severely limited.

“Having the option of Planned Parenthood is something that is really comforting for a lot of women. If I was in a financial issue and I needed that free and accessible care, I think that having a Planned Parenthood I could turn to is a right everyone deserves,” said senior Emma Harris.

That being said, with a presidential election occurring right now, hopefully morals play into voter decision making, not just an adherence to party lines.

“I want someone in office who is going to advocate for both genders, for all races and for all incomes, and I think that defunding Planned Parenthood goes against that,” said senior and registered voter Avery Shea. “It doesn’t stand for people in lower incomes, it doesn’t stand for women in general.”

It’s terrifying to think of a world where free health services do not exist for women. With this being said, consider this: this election isn’t simply about who will provide the best economy or outlive the other. Honestly, neither candidate is great, but Joe Biden is clearly committed to providing basic human rights and health care to everyone across the nation.